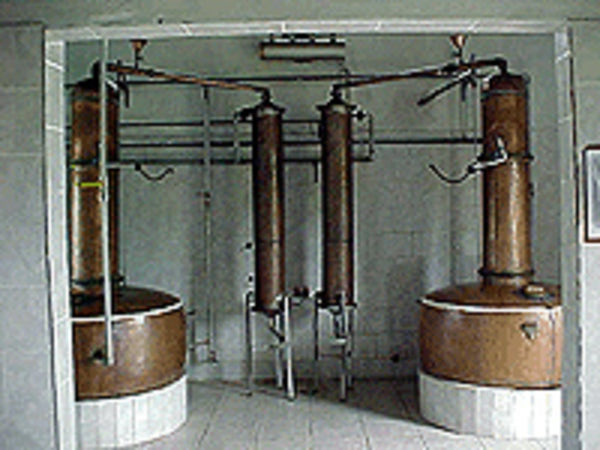 Distilling: The Fazenda Vaccaro uses two copper stills with a capacity of 400 litres each. The heating occurs through vapour, circulating in a metal tube in the still. This system results in a higher quality of the product, thanks to the equal heating of the “vinho”. This way we avoid burning of the liquid at the bottom, a result of direct fire. The boiler also accelerates the process. Temperature control in the still is done through metres regulating the vapour outlet. A more efficient distilling also reduces the acidity and the grade of copper in the cachaça.
Out of this process we extract two by – products : the “cabeça” and the “vinhoto”. The cachaça “cabeça” (head) originates from the beginning of each distilling: the first 10% of the distillation are separated. These first 10% are considered to contain a concentration of toxins causing headaches and severe hangovers. The “cabeça” of harvest 2001 – 2002 was entirely used as fuel for vehicles, after having increased the alcohol percentage from 70 to 90 through a new distillation. The “vinhoto”, the other by – product from distilling, is as a matter of fact the most important one, due to its volume (85% of the original “vinho”), richness in nutrients ( freed through fermentation and distillation) and its easy and cheap use (because of its liquid form). The Fazenda Vaccaro uses a tiny part as foliage fertilizer. The rest is mixed directly into the “bagaço” and dispersed on the sugar cane fields. It can also be used as a mineral added to the animal fodder in generale também diminui a acidez e o teor de cobre na cachaça.