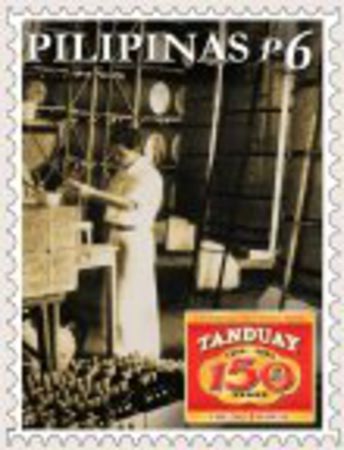 Commemorate stamp
On March 10, 2003, we requested the Philippine Postal Corporation to issue special stamps that will commemorate our 150 year anniversary. The Philpost approved our request on June 6, 2003 and was formalized in a Memorandum of Agreement on July 15, 2003 between Dr. Lucio C. Tan and Gen. (ret.) Diomedio Villanueva, Postmaster General. The special stamps were issued starting on January 22, 2004. The stamp featured a circa 1950 photo of Tanduay's ageing and compounding section. These stamps are considered as collectors items.
[Die Quelle: Website der Gesellschaft, zitiert 2006]